If you’ve lost 10 pounds, you must be healthy, right? Of course not. Your bathroom scale can’t detect disease, infection, injury, etc. Just as weight alone does not reflect your overall health, page views alone don’t  reflect the overall success of your digital content. Don’t misinterpret  page views to mean any of the following.

This is the first of a series of three posts about page views. The second installment is Use page views wisely. The final post is Page views mean so much.

Note: This post was posted on July 5, although its publication date mistakenly read May 24. Thank you to Roxanne Hack for pointing this out.

If you manage multiple social network accounts for clients, or if you a have a team of workers who are tasked with being socially active, you’ve probably surveyed various tools to monitor the performance those accounts.

Empire Avenue is not billed as a social metrics tool, but after playing it for a week I became more aware of what some of my friends were doing on Twitter, Facebook, YouTube, Flickr and LinkedIn. That’s exactly what I would need if I managed a team of customer service reps, reporters or social media account managers.

At its most basic level, Empire Ave is a stock market simulator in which you build virtual wealth by investing in social people. From Empire:

Every day, you’re on Twitter, talking to friends on Facebook, uploading videos or photos, and writing blog posts. Just for doing that stuff, you’ll earn Eaves – our virtual currency – and we’ll dish out some more virtual cash to your shareholders.

So you gain wealth when the people you invest in engage in social activities. There’s a whole lot more to the game, but the basics are enough to show how easy this game can be used to evaluate and manage your company’s social activity.

The biggest challenge I see is that Empire Avenue might be too fun. Since beginning, I’ve divested in my friends (sorry) and transferred those funds into accounts with a higher return.

Oh yeah, another challenge is that your share price isn’t determined exclusively by your social activity. Your price also goes up if people buy more shares of you. So … go to http://empireavenue.com/?t=fvcx1nr0 and add (e)KSABLAN to your portfolio!

Here are a couple of links to get you started in the game:

It’s nearly impossible to find out how many times a web page has been tweeted. At 11:45 Thursday night, I gathered these numbers to help explain what I mean.

A Mashable blog post about Bit.ly was tweeted 12 times (as of 11:45 Thursday night). At least that’s what the official Twitter button widget said on the post itself. 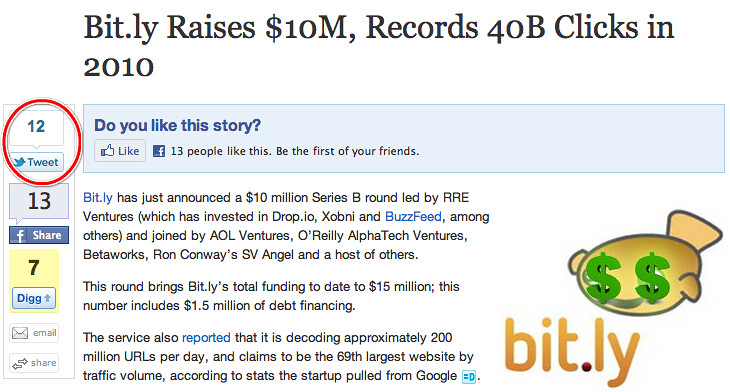 I clicked on that 12 button, which brought me to a Twitter search for tweets linking to that page … and I counted 73 tweets, not 12.

I randomly pulled up one of those tweets, and checked out the statistics provided by bit.ly. Scrolling down the page to “conversations” revealed 99 tweets, not 73 and certainly not 12.

Armed with my BackType bookmarklet, I decided to go to a fairly unrelated source for some numbers. Oh no, the BackType page for that Mashable post, showed a whopping 794 tweets. That’s more than four times the tweets counted by Bit.ly, Twitter search, and the tweet button combined.

When Twitter rolled out its own tweet button, they partnered with  Tweetmeme, creators of the old “retweet” button. I wanted to see what the veteran service had to say. The Tweetmeme search for that Mashable post found more tweets than any of the other methods: 898 tweets.

Yes, this is only one example, and a very non-scientific experiment. But I performed this little exercise because I see these discrepancies all the time, especially with popular posts/pages. Of course, one anecdote doesn’t prove that all counters are wrong, but with so many services disagreeing on one simple number, I simply can’t bring myself to trust any of them to be right.

t.co to the rescue?

One service might be able to provide the one tweet count to rule them all. Sometime this year, Twitter plans to wrap “all links shared on Twitter.com or third-party apps” within its own t.co URL. It will become part of the Twitter infrastructure. If Twitter can aggregate the many different URLs that are used to share a single web page, then it will be able to provide an accurate count of tweets linking to that page.

Twitter will also track clicks on those links. If I were in there shoes, I would consider charging for those t.co statistics.

Every link shared via Twitter will start with http://t.co by the end of this year. That was the gist of one part of an email from Twitter last night. The most important thing for businesses to note is that, with that change, Twitter will start tracking every time a tweeted link is clicked — no matter what shortener, web site, app or client is used to write or read the tweet. Twitter will finally have an accurate way to measure …

That kind of information can help shape and measure the return on investment for companies using social media to drive traffic. This is unique information that, if used wisely, can boost an organization’s bottom line. That sounds like the kind of online content for which the Wall Street Journal is able to charge.

What do you think?

Will Twitter start providing these numbers for free, or are they creating the foundation for a new stream of revenue?